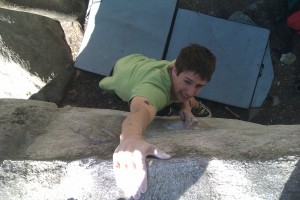 After David had finished his writing exams (“Abitur”) in school he and Ruben had the vision to escape from city looking forward to stay in the nature – cooking, climbing and sleeping there.

Shortly after the Northern German Lead Championships David decided to stay one more week in Hannover having some driving lessons and time for training indoor. At the weekend he visited Alex Megos in the Frankenjura to climb with him on the rocks. It was pretty bad weather so that they unfortunately could just climb on “Der Student” because there it is always windy, sunny and the rock is not exposed no matter what happens. David topped out the classic “Simon” (8a+) on his first go that day (he tried it one or two months ago but it was horribly cold that day that he wasn’t able to climb it). Alex was and still is very very strong. He easily did “Nola” (8b+) twice in a row and this four times with little rest until he wasn’t excited anymore and was chilling in the sun. He said that he did it approximately 65 times by now. He is crazy and for David it makes always fun to climb with him. END_OF_DOCUMENT_TOKEN_TO_BE_REPLACED