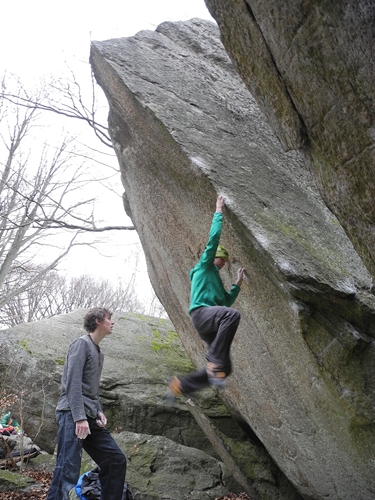 From April, 1st until 10th we were in Kjugekull for bouldering on its terrific granite. It is a well-known and one of the best boulder areas in Sweden and we have to say that we really enjoyed the time we stayed there. Not just the climbing and nature surrounding Kjugekull but also the people we met, the language, the food and all the other little things we discovered on our short trip turned out to be a memorable adventure. The only matter we were a little bit annoyed at was the weather: During the 10 days we had to pause extra 2 days because it was raining. Finally, it was the least evil though.

We started in the afternoon of March, 31st with our white van in Hanover heading for Fehmarn, a little island in Northern Germany, where the ferry to Denmark was waiting for us the next day. Rushing through Denmark we quickly passed its capital Copenhagen and crossed the Öresund bridge to enter Malmö in Sweden. 100 kilometers further north we arrived a bit tired but motivated at Kjuge, a little village of maybe 10 houses, to the north of Kristianstad in the province of Skåne län. 10 days of brilliant climbing were waiting for us!

The area Kjugekull is located on a low hill surrounded by huge woodlands, lakes and fields and consists of a large crowd of big and small blocs covered by moss and protected by the shade of birches and pines. We were struck that the moss was glaring but this could be just an illusion. We felt at home and for us the atmosphere in the forest brought us the old stories to our mind when Vikings settled down after a long journey on the sea and pitched up their camps told us when we were little kids. We also changed twice the place for the night and went to Tosteberga which is directly at the sea. The nature reservation on the location is very impressive. Such a quiet and peaceful place! We really enjoyed just sitting together on a little stone at water’s edge and watching the never ending sea and the groups of geese passing by heading for a certain destination far away. David says “This could be a place to stay for a while or even get old”. Ruben agrees.

The climbing in Kjugekull is special. It is similar to the style of climbing on granite in the Alps but also different. In some problems you sometimes climb on kind of crystalline surfaces and often on very coarse granite which is very typical for Kjugekull. You basically find a lot of crimpy lines trough overhangs, prows, arêtes and verticals.

We focused on repeating the hardest classics of Kjugekull. Some Swedish locals said that it is something like a prize exhibit for bouldering in Sweden and they were curious how the grades felt like for us foreigners. It is always hard to give a statement about the grading and it stays to be a subjective opinion. For us it is important to climb hard stuff because if we do so we can find a physical and mental challenge with all its connections which we really like to work on and which is really satisfying but in our opinion grades just give an orientation and structure. What we really like about climbing is the freedom and variety and this is what we experienced in Sweden and what we really enjoyed. It’s really worth it to go bouldering in Kjugekull and we definitely want to come back to finish the unfinished climbs we have left there and to work on existing projects.

At least we have to mention one pretty iconic arête we both managed to send called “Alla vill till himmelen, men ingen vill dö” (fb 8A) which is translated something like “Everyone wants to be in heaven but no one wants to die”. It’s located on an approximately 8 meters highball and contains long and powerful moves on open pinches and crimps. The hardest physical part is a long move to an open pinch from a positive sharp crimp in the middle of the arête which in the end takes course over a corridor where it would be very fatal to fall. The mental and real crux wasn’t to stick this move but rather climbing the “easy” finish on nearly wet holds (it was raining before) and some moss too. And finally after we have done this problem we understand that the given name for the problem makes sense because you want to climb up that breathtaking line on that highball but in the same time you also don’t want to fall into the corridor and hurt yourself (or even die which however is very improbable). We will keep this line in mind! 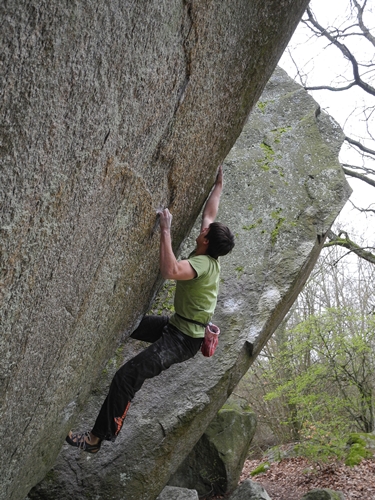 We hope to bring out a little video clip about our stay in Kjugekull soon where nearly every hard climb we’ve done during this 10 days is featured.

Here is also a tick list of the rest of hard classics we’ve completed in Kjugekull:

We really thank Erik Grandelius, a Swedish friend who David got to know the first time in Fontainebleau last year, who guided and supported us. He is currently working on a hard project through a big roof in Kjugekull which we have tried too and already had to struggle on the first move. Keep on climbing hard mate and good luck for this line! Thanks also to Bernhard Viehweger who took some fast pictures of us while trying the highball and spotting Erik in his project. 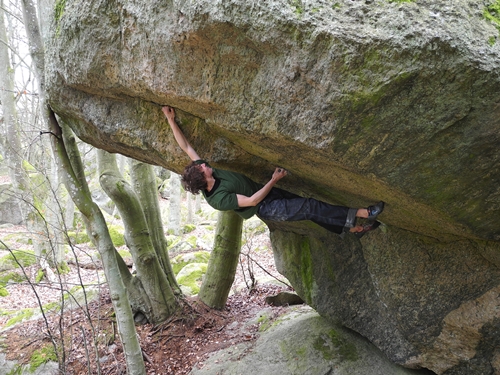 Cheers from Fontainebleau and Kalymnos