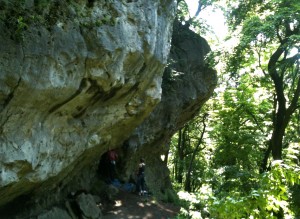 Yesterday and today I escaped from the city and went out to the Weser-Leine-Bergland (a small mountain range in Northern Germany) with my dad 50 km to the South of Hannover. The weather was good and the rock wasn’t so crowded so that we rejoiced in climbing and had some quiet. I was climbing at the Elefantenbäuche which is located in the Ith (above a small village called Ockensen). There the limestone is pretty compact and sometimes it’s hard to read the routes from the ground because some of them are not so often done. Regrettably it was raining a lot before so that the water was infiltrating into the rock and significant holds were getting wet.

Nevertheless I tried out the dry ones. There were two UIAA 10th grades to go for so that I first topped out “Renaissance” (8a+) which is a new route bolted in 2012. Furthermore, mentionable is surely my ascent of “Andalusischer Hund” (8a+/8b) which was put up by A. Rappmund in 1991 and got just one repeat by Ralf Kowalski until now. That means that I did the third ascent ticking it in the 3rd try. I was very happy because I was very close to fall at the last hard move. It is a approximately 15 meters route with a crux consisting of 5 moves in the middle. A blocking move to a very bad crimp for the right hand, left foot very high, holding your body on the wall with a small mono for the left hand and then an extended move via a bad sloper to a moderate crimp. Very technical and fingery. It calls for repeaters! 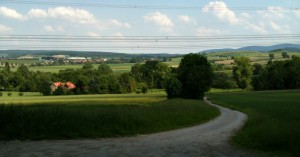 Ein Gedanke zu “One weekend in the Ith”