The last stage of the German Lead Championships took place at Neu-Ulm (Bavaria) last Sunday. As last year, this year’s championships consisted of 3 competitions, in Germany known as German Lead Cups. The first cup was hosted at the brand new DAV climbing gym at Munich Freiman and the second at a rather old but gold climbing gym at Frankenthal in Pfalz close to Mannheim. For us two it was a nice series with various challenges because the Cups had different route settings.

We’ve never been to the new gym at Freiman yet so we didn’t have any idea how the wall with its structures and angles would be like. In addition, it was outdoors but luckily it wasn’t that autumnal like now. Usually artificial holds get more slippery when cold. The qualification routes were sustained and demanding. Ruben easily qualified for finals and David nearly missed it with an 8th place. The final was well set but could have been a bit harder. Jan Hojer and David fell at the last move to the top but Jan won due to better results in the qualifications. Ruben finished 1st in the juniors ranking and 5th in the men’s category. He definitely could have done better but he hesitated while clipping and lost power and flow.

Frankenthal is a steep and powerful wall and the 2nd cup was set in a very dynamic style with at least one jump in almost every route. The qualifications went well and we both qualified for finals as 3rd and 4th. Unfortunately, the final route was very unsustained. It was maybe an 7c+ climb until a huge jump to the left where almost every finalist fell except Jan who fell two moves later. It is always a pity when one move spits off more or less every athlete so that the pre-round counts for a final result. However, we were close on the jump (David made a foot mistake and Ruben got stuck with his hand in the rope while jumping) and definitely able to stick it so it’s hard to complain. Ruben finished 1st in the juniors again and 3rd in the men’s event which was one of his best results so far. David missed the podium as 4th place which made him a bit frustrated. 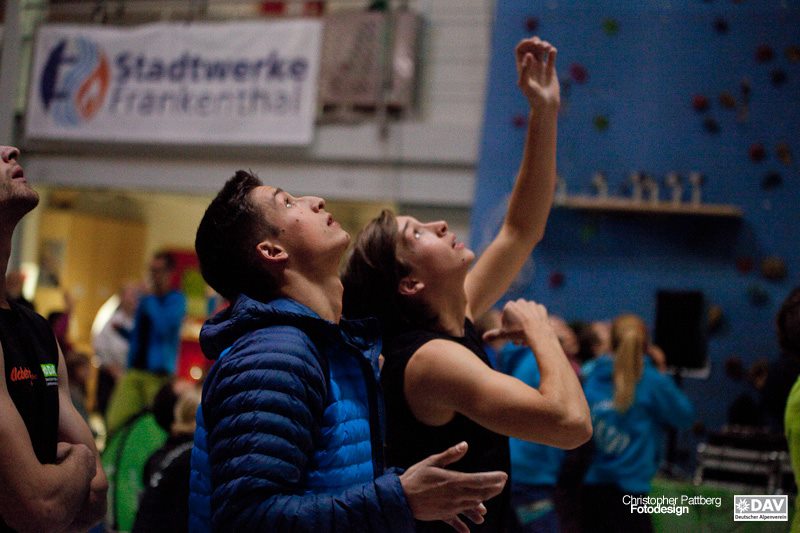 Observing the final route in Frankenthal together

Last weekend turned out to be kind of a speed final in a lead final route. The qualification round saw a bunch of double tops with a tricky slab. Regrettably, Ruben fell too early in the first qualification route and got a time-out in the slab. He couldn’t make finals with a 12th place but nevertheless he won the juniors game and therewith became German juniors lead champion winning 3 out of 3 events. And that was also enough to save a 5th place in the seniors championship overall. Pretty good season for him this year!

Sebastian Halenke was the first to top the final route. And since Jan Hojer, Chris Hanke and David also topped it, it was all about time to secure the victory of the day. David, being the last one to come out of the Isolation zone, actually had the most pressure but eventually it was a tactical advantage because he knew from backstage that the route must be doable and that he had to climb fast. In the end he clipped the anchor by 15 seconds slower than Jan who was literally running up the wall without taking a single rest. A 2nd place in the day ranking assured David of the vice title in the championship behind Jan which was tactically the priority because Jan more or less secured the title already by qualifying for the final. Props to him for a strong performance on all three events and especially to our team mate Lena Herrmann who became German lead champion after a break of competition climbing and some 8c’s on the rocks lately! 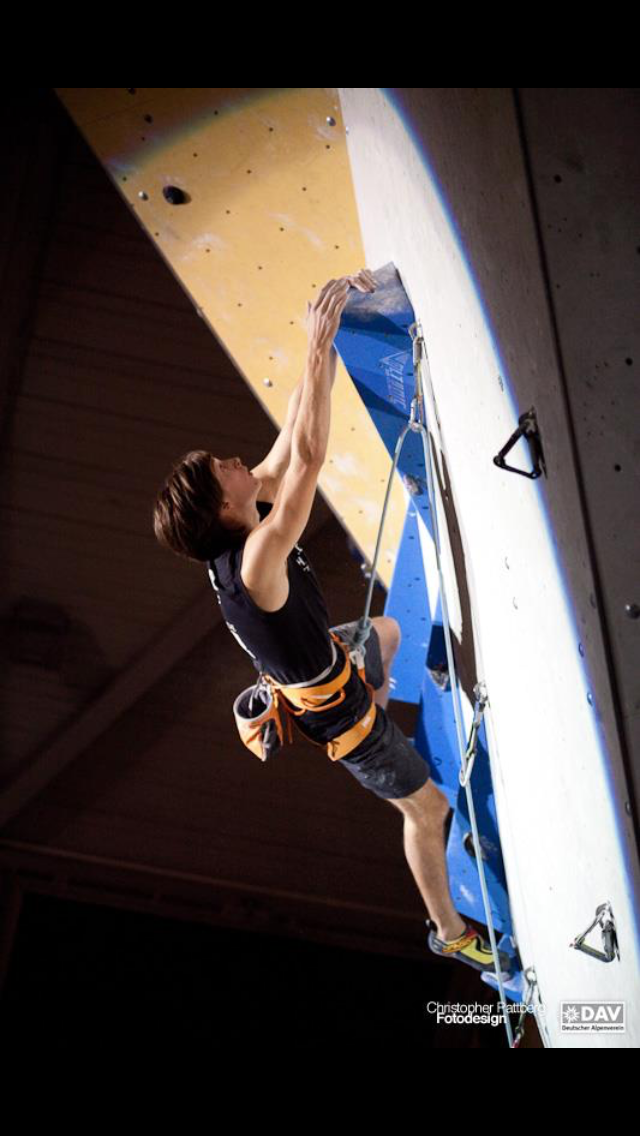 Ruben resting at volume in the final route in Frankenthal

We had a lot of fun this year competing at the nationals but from our point of view there are still some things which can be suggested to make lead competition climbing in Germany more attractive. Not only for the athletes but also for the audience. This is why we want to mention some points how to improve the quality of the events based on what we’ve experienced this year:

That’s it for this year’s competition climbing. We are already looking forward to the next season. Now we are already in Catalonia for some off-season rock climbing. We’ve got some great projects that we want to work on and it’s always nice to see the big rock climbers’ family from all around the world at the crags again. It always means great climbing together and good vibes. We are excited and keep You updated with our climbing experiences there.

Find the whole result list of the juniors and the seniors German Lead Championship via the links! 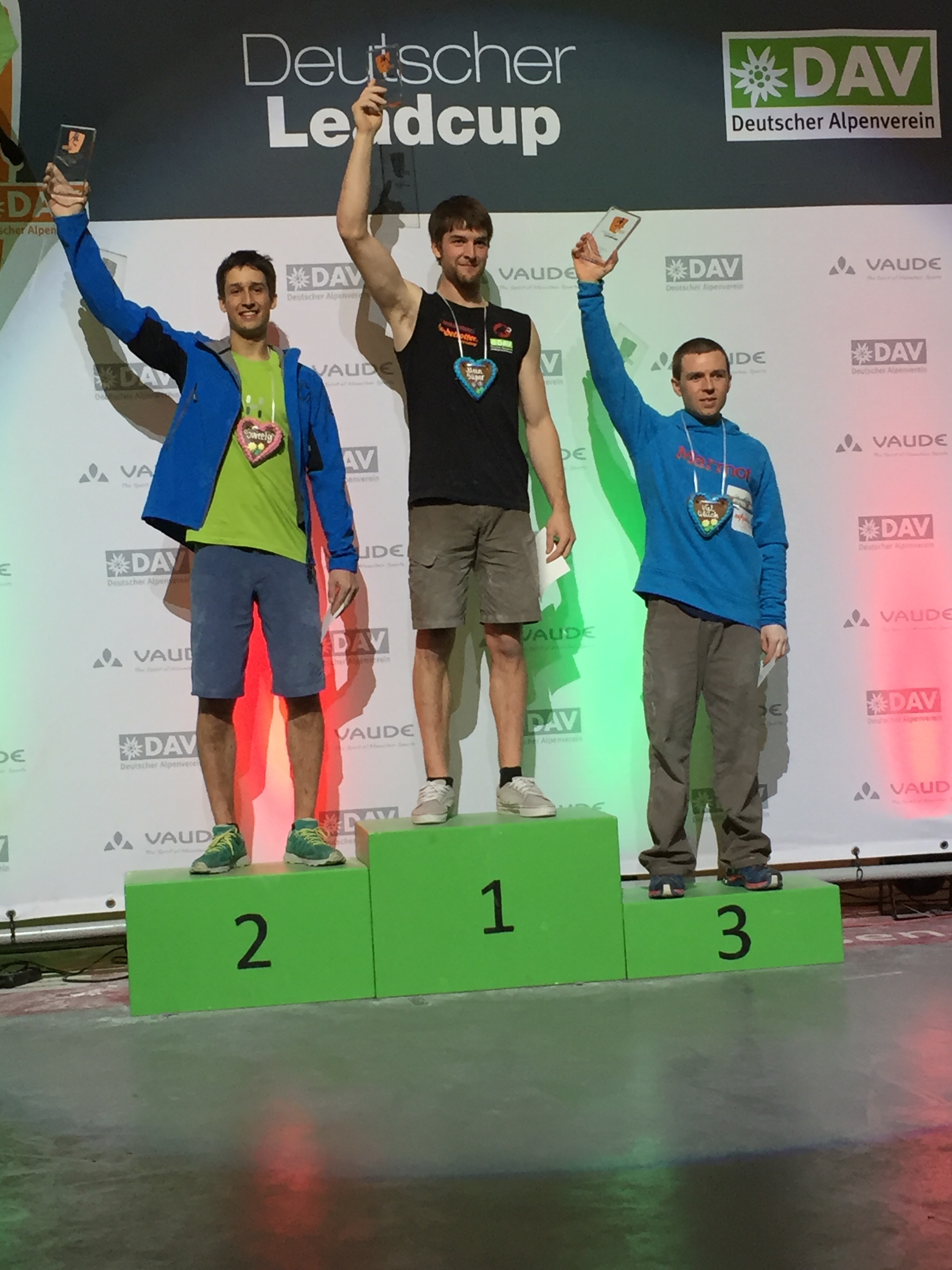