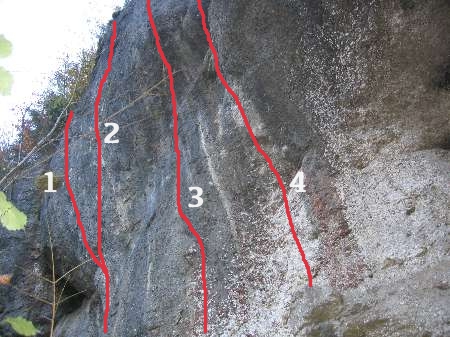 Two days ago I was able to send Black Label (9a) at Schneiderloch (Ailsbach-Valley) in Frankenjura. It’s a new route by Markus Bock in 2013 which had only seen one repeat by Alex Megos last year. Now I have secured the 3rd ascent of this test piece.

During a comp last year Markus Jung recommended it to me. He was talking about the moves and I became excited to try it. After the comp was over I put it on my tick list and when I’ve headed to Nuremberg to live there for a while it became very close. I just had to wait for the right moment to try it. Around the Easter holiday my brother Ruben visited me and we drove out to the crag to give it the first tries.

The route climbs up the slightly overhanging wall between the famous Corona and Pantera, two other 9th French graded routes. It is the same style of climbing, so pretty fingery on crimps and little pockets. It is around 15 meters high on compact rock which is neither loose nor pretty structured.

You can divide it into two different parts. The first part is a short 8b/8b+ route (around 12 moves long on four bolts) leading to a rest in the middle of the wall. Here the crux is a long move from crimp to crimp with a high foot hold. The clipping is quite powerful too. The second part is a 6 moves boulder problem over a small bulge which is around Fb 8A/8A+ I would say. You take a three finger undercling for the right hand and move to the left to get a three finger side hold crimp. From there You have to stick a long move to a round and open three finger pocket high up right where You have to keep the tension (I could still stand on the holds of the rest making it easier for me, I am around 1,82 meters high, smaller climbers probably have to master the swing of a releasing right leg while moving up – see pic below). Afterwards You put Your left foot on a small hold in the overhang and lock-off to a mono for the left hand. Then a tensiony foot match to catch a bizarre three finger crimp for the right hand. One last hard dynamic move to go to a juggy slot heading on a few more moves to the anchor. To be accurate but that’s already it 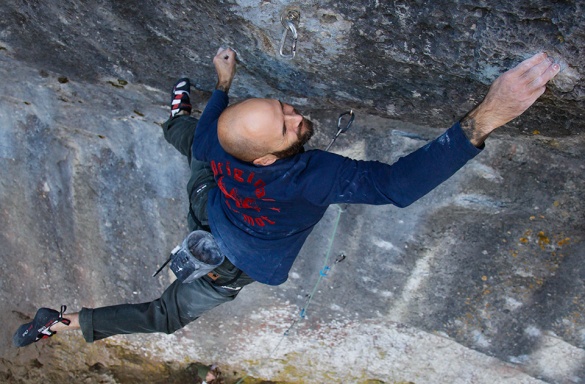 At the beginning the first part felt quite hard until I figured out the proper beta for me. There are some tiny intermediate holds but I simply couldn’t hold them. Instead I went for the long moves leaving the small ones out

I think what I’ve climbed is the proper beta and also doable for smaller climbers. At the rest You’ve got three good holds. I was mainly shaking my hands on both the right ones although they are worse. The body position is better though. Before the temps were colder. So when I climbed up there I always had to rest until my finger tips weren’t numb anymore. That was a bit annoying because I had to stay there longer than I actually wanted. I still have to struggle with numb finger tips after I’ve done some hard moves on very little crimps in cold conditions. You have to keep in mind that the crag is in the shade all day long. However, now the temps are springlike and warm enough that I didn’t get numb fingers two days ago. The first part became routine because I kept falling three times on almost every single move in the second part. Except the first two moves where I’ve never been falling I had to climb up the first part around 12 times. To finish the whole route I certainly needed around 15 tries. So to speak it was a good power endurance and finger strength training for me. The hardest move was definitely the one from the mono to the three finger crimp right before the saving slot in the second part. Before I started to give it some serious tries I had to get up to that point to especially warm up my left middle finger every time. Otherwise I wasn’t able to seriously pull on the mono (I was only able to put my first phalanx inside it).

To sum up in general: After the work is done and You have received Your present You always start to realize that hard work pays off. And it is even more satisfying if the climb was very challenging for You. It might sound strange but through failure You begin to improve Your performance step by step and You will only find it in the things which force You to try as good as You can over and over again. Actually failure is the key to become a physically and mentally stronger climber. That’s what it means to get out of Your own personal comfort zone. And that’s what to keep in mind!

Keep crushing out there! All the best, David