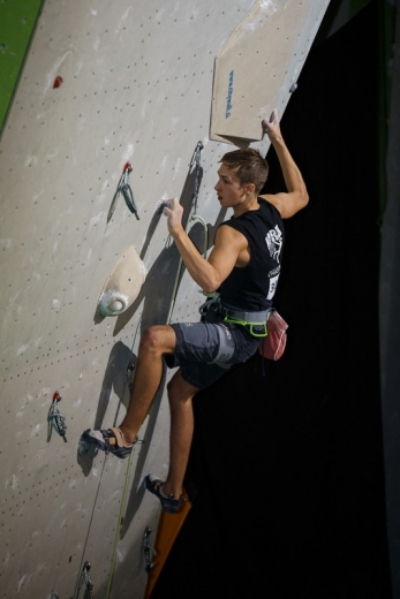 After the first German Lead Cup in Darmstadt we both were staying at home in Hanover until the second cup in Neu-Ulm last weekend. For David it was time to rest and recover a little bit from all the traveling before. Since April he has been on the road. Ruben went to school dealing with a marathon of exams before the teachers let him go for a two weeks fall holiday.

After 6 hours at a stretch on the highway we finally arrived at Neu-Ulm at half past midnight and went to bed which maybe wasn’t the best preparation right before the comp. David went to Neu-Ulm without any expectations, relaxed and curious how he will perform. Ruben wanted to give his best at the senior’s comp but put his main focus on the youth event. He wants to secure his previous title of the last season.

We both climbed well in the men’s qualification round. Ruben finished top 3, David landed on 6th place. So we both qualified for the final of the best 8 men.

The final route was pretty sustained and homogeneous to the end. Right from the bottom the climbing was challenging with awkward body positions and powerful long moves. So the climbers had to be very attentive already during the first part of the route. David was the first of us to leave the isolation zone. He mastered the first passage very confidently and took a little rest on a side pull afterwards. Then he turned into the „psyched modus“ and gave everything he could. He fell off the wall very high up being totally pumped. He couldn’t even clip the quickdraw anymore. Therefore he was really satisfied because he couldn’t have moved any further up and didn’t make any mistake. In relation Ruben was too hesitant and indecisive at the start. On a short climbing passage on an arete he had some trouble and unexpectedly tipped over to the right falling into the rope. He knew what he had done wrong and the next time he wants to perform more determined, confident and freed at the national men’s events. David surprised himself with a strong performance winning the men’s German Lead Cup for the first time (and within the juniors’ category of the day). After the final Ruben placed first from behind of the men’s result list

The day after, on Sunday, Ruben didn’t let on about something and showed excellent effort in the youth’s qualification round. He topped both routes as the only competitor. In the final route he climbed multiple moves further up as the other athletes and therewith repeated to win the youth A category as he did in Darmstadt two weeks before. Good job!

Now we are very happy not staying all day long in a stuffy climbing gym because we are in the Frankenjura for some rock climbing. On November, 8-9th there will be the final of the German Lead Cup in Berlin. David has good chances to become German Lead Champion in both the juniors’ and the men’s category. If Ruben wins again he would be German Lead Campion in the youth A category and finally would have secured the youth title for the 3rd time in a row. Of course that would be awesome but it isn’t done yet. There are excellent competition climbers waiting. But we are staying cool and confident. We are on the rocks now and try some hard lead projects. The conditions are cold and dry and we have a lot of fun together. Now it’s time for the final spurt, to accelerate for Berlin and we are looking forward to it! 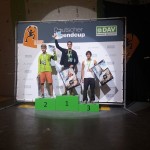