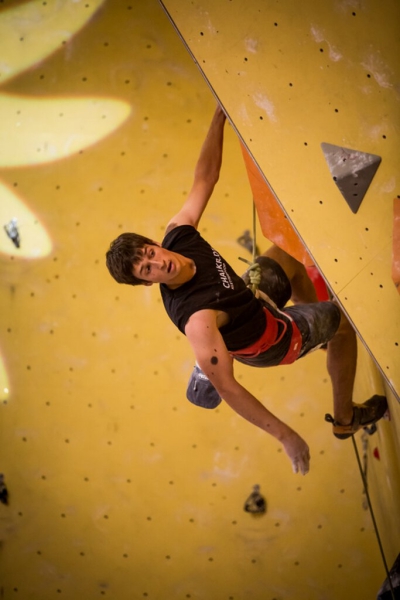 The first German Lead Cup of this year has been a great event held in Darmstadt near Frankfurt. On last saturday there were the lead qualifs of the youth categories followed by the speed youth comp. On sunday it was the adults’ turn (qualifs + finals) with the youth lead finals in between.

Ruben was preparing himself with intense lead training in Hanover and Hamburg besides working for several exams at school. It’s his last year in highschool. So it becomes time-consuming and of course stressful. David just came back from the Petzl Roctrip 2014 making its way from Romania to Turkey via Bulgaria, Mazedonia and Greece within 40 days with 10 different base camps (more news to come here!). So recently he has been climbing on the rocks.

We both met in Darmstadt the day before and slept in our van in front of the gym. On saturday morning Ruben headed into the gym to give the youth qualification routes a try. He topped both. For him there was no need to go for the speed youth comp because he already competed once in Munich this year and saved enough points (he became 3rd) to now focus on lead and the overall result. 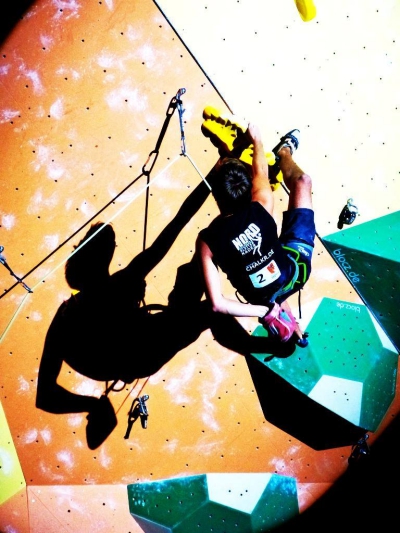 The sunday was packed with a pretty full schedule. At first lead qualifs of the adults, then youth lead finals and finally the adults’ finals in the evening. We both qualified easily for the adults’ final with two tops in the two routes by David. Ruben was the last competitor in the youth finals showing a superior performance with the single top of the resistent and varied final route. Especially a hard sequence at the end with a long move from volume to volume he mastered without jumping but instead statically and with control. The other athletes had already been falling off the wall some moves before so that it can be said that in relation Ruben’s performance was outstanding. Very well done besides the double pressure of school and climbing on high level! The adults’ final had no single hold but volumes all the way up to the top. The style was rather bouldery with an interval of good rest positions and boulder problems. It was also something new which hasn’t been there before. We probably have climbed the most expensive comp route in our careers ever too

Volumes nowadays cost from 50 up to more than 700 or 800 euros (respectively for a single one) and to insert over 20 or 30 of them in a single route is a noble investment. Due to a concentration mistake Ruben overlooked the first quick draw of the men’s final unfortunately getting disqualified. Indeed this wasn’t his intention but once you step over a quick draw with both feet you get disqualified. Never again Ruben! In contrast David caught a fluent climbing flow working himself up the labyrinth of volumes. He fell one move before the saving volume to set off for the final jump to the top hold. It was a tiny moment in which he lifted his upper body a little bit too high up the slopy volume so that he pushed himself out of the wall slipping off the volume immediately. It was only Mathias Conrad who fell on the final jump securing the stage win. Good job, dude! It was close for David because if he would have done one move more to the next volume he could have gone for the jump and due to his better qualification performance he could have won the comp. But don’t worry, be happy! There are two more chances to go for the victory for us in Neu-Ulm in two weeks and the capital Berlin in one month. This time we had loads of fun and we are looking forward to competing soon again